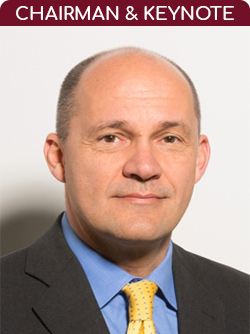 C. Oliver Kappe is Professor of Chemistry at the University of Graz (Austria) and Scientific Director of the Center for Continuous Flow Synthesis and Processing (CC FLOW) at the Research Center Pharmaceutical Engineering GmbH (RCPE). He received his diploma (1989) and his doctoral (1992) degrees in organic chemistry from the University of Graz where he worked with Gert Kollenz on cycloaddition and rearrangement reactions of acylketenes. After periods of postdoctoral research work on reactive intermediates and matrix isolation spectroscopy with Curt Wentrup at the University of Queensland in Brisbane, Australia (1993-1994) and on synthetic methodology/alkaloid synthesis with Albert Padwa at Emory University in Atlanta, USA (1994-1996), he moved back to the University of Graz in 1996 to start his independent academic career. He obtained his „Habilitation“ in 1998 in organic chemistry and was appointed Associate Professor in 2000. Since 2011 he is Professor for „Technology of Organic Synthesis“ (Organische Synthesetechnologie) at the Institute of Chemistry at the University of Graz. He has spent time as visiting scientist/professor at e.g. the Scripps Research Institute (La Jolla, USA, K. Barry Sharpless, 2003), the Toyko Institute of Technology (Toyko, Japan, T. Takahashi, 2008), the Sanford-Burnham Institute for Medical Research (Orlando, USA, 2010) and the Federal University of Rio de Janeiro (Rio de Janeiro, Brazil, 2013-2015).
Professor Kappe has an extensive general experience and a 25 year track record in synthetic and physical organic chemistry, process intensification using batch microwave technology and flow chemistry/microreaction technology, communicated in ~400 scientific publications (Research ID, WoS h-Index 77; 2018 Clarivate Analytics Highly Cited Researcher). For the past decade the focus of his research has been directed towards flow chemistry/microreaction technology, encompassing a wide variety of synthetic transformations and experimental techniques. His research group is actively involved in projects dealing with API synthesis and manufacturing, employing a number of different enabling and process intensification technologies. For his innovative work in microwave chemistry he received the 2004 Prous Science Award from the European Federation for Medicinal Chemistry and the 2010 100.000 € Houska Prize in addition to a number of other awards. In 2015 he was named Fellow of the Royal Society of Chemistry. In 2018 is received the IUPAC-ThalesNano Award in Flow Chemistry.

C. Oliver Kappe is the Founding Editor (Editor-in-Chief from 2011-2018) of the Journal of Flow Chemistry (Springer) and a board member of the Flow Chemistry Society. In addition he has been an Editor of the Journal QSAR and Combinatorial Sciences (Wiley-VCH, 2003-2007) and has served/serves on the Editorial/Advisory Boards of Green Chemistry, Reaction Chemistry & Engineering (RSC), Organic Process Research & Development (ACS), Current Opinion in Green and Sustainable Chemistry, Current Research in Green and Sustainable Chemistry (Elsevier), ChemMedChem and ChemSusChem (Wiley-VCH), Journal of Combinatorial Chemistry (ACS), Molecular Diversity (Springer), Journal of Heterocyclic Chemistry (Wiley-VCH) and a number of other journals. For several years he has been teaching courses on flow chemistry for Scientific Update.
For more information on C. Oliver Kappe, see his LinkedIn Profile and his Author Profile in Angewandte Chemie.