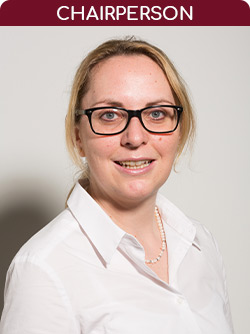 Assoc. Prof. at Institute of Process and Particle Engineering, Graz University of Technology

Assoc.Prof. Heidrun Gruber-Woelfler studied technical chemistry at Graz University of Technology, Austria with a focus on chemical engineering. After her PhD dealing with organometallic catalysis and molecular modelling, she did her Post-Doc in the area of continuous processes for the synthesis and purification of active pharmaceutical ingredients. In 2010 she was awarded with an Elise-Richter project by the Austrian Science Fond (FWF), which is a Career development funding for highly qualified female scientists, and started afterwards a tenure track at Graz University of Technology. Since 2014 she is the head of the research group “Continuous Synthesis and Processes” at the Institute of Process and Particle Engineering (http://ippt.tugraz.at/), Graz University of Technology and since 2016 the deputy head of this institute. After external research stays in the groups of Volker Hessel at TU Einhoven and of Alastair Florence at CMAC, Glasgow, she finished her habilitation (venia docendi) in the field of Pharmaceutical Engineering in 2018.

Heidrun Gruber-Woelfler is principle scientist at the Research Center Pharmaceutical Engineering (RCPE, (http://www.rcpe.at/) GmbH. and since July 2017 the Deputy Director of the Center of Continuous Flow Synthesis and Processing (CCFlow) in Graz. She was awarded with the Alumni-Prize for Excellent Teaching at TU Graz in 2016, with the Anton Paar Research Award in 2019 and with the Outstanding Early-Career Paper Award by the Journal of Reaction Chemistry and Engineering in 2020. Her current projects with industrial partners and funded by national and international agencies deal with heterogeneous (bio)catalysis and continuous processes, as well as reactor design including additive manufacturing, real-time analyses and self-optimization.